Take a look at the above code, you may have run into this familiar issue yourself. We'd like to represent the pageable results of this HTTP API in our types, while still be asynchronous.

Traditionally there would be 4 ways to approach this;

Well it's about time we adopted a new type and end this madness. That's what IAsyncEnumerable<T> is for.

Currently IAsyncEnumerable<T> is a concept which exists in a few places, with no singular definition. The version I will be using today lives in the Reactive Extensions repo, in a fork that is based off of the latest C# 8.0 proposal.

Reactive Extensions (Rx) is the home of Observable implementation and extensions, it is also home to a sibling project named Interactive Extensions (Ix for short). Rx has lots of extensions and tools for composing pushed based sequences, and Ix is very similar but for pull based sequences (IEnumerable<T>). The part I am interested in for this post is the async part, which I'll be referring to as Ix.Async, this is shipped in it's own nuget package, and I will generally be referring to the IAsyncEnumerable<T> definition that lives here (although this will map trivially to other implementations).

In the near future, C# 8.0 will introduce Async Streams (I prefer the term Sequence, as Stream is already a different .NET concept) as a language feature, and there will be a new definition of IAsyncEnumerable<T> it will work with, but that doesn't stop us using Ix.Async today, either using the current definition which slightly differs from the C# 8.0 proposal, or building the fork with the latest definition in.

This is the definition of IAsyncEnumerable<T> from the C# 8.0 proposal, it should look very familiar, it is just IEnumerable<T> with an async MoveNext method, as you might expect. 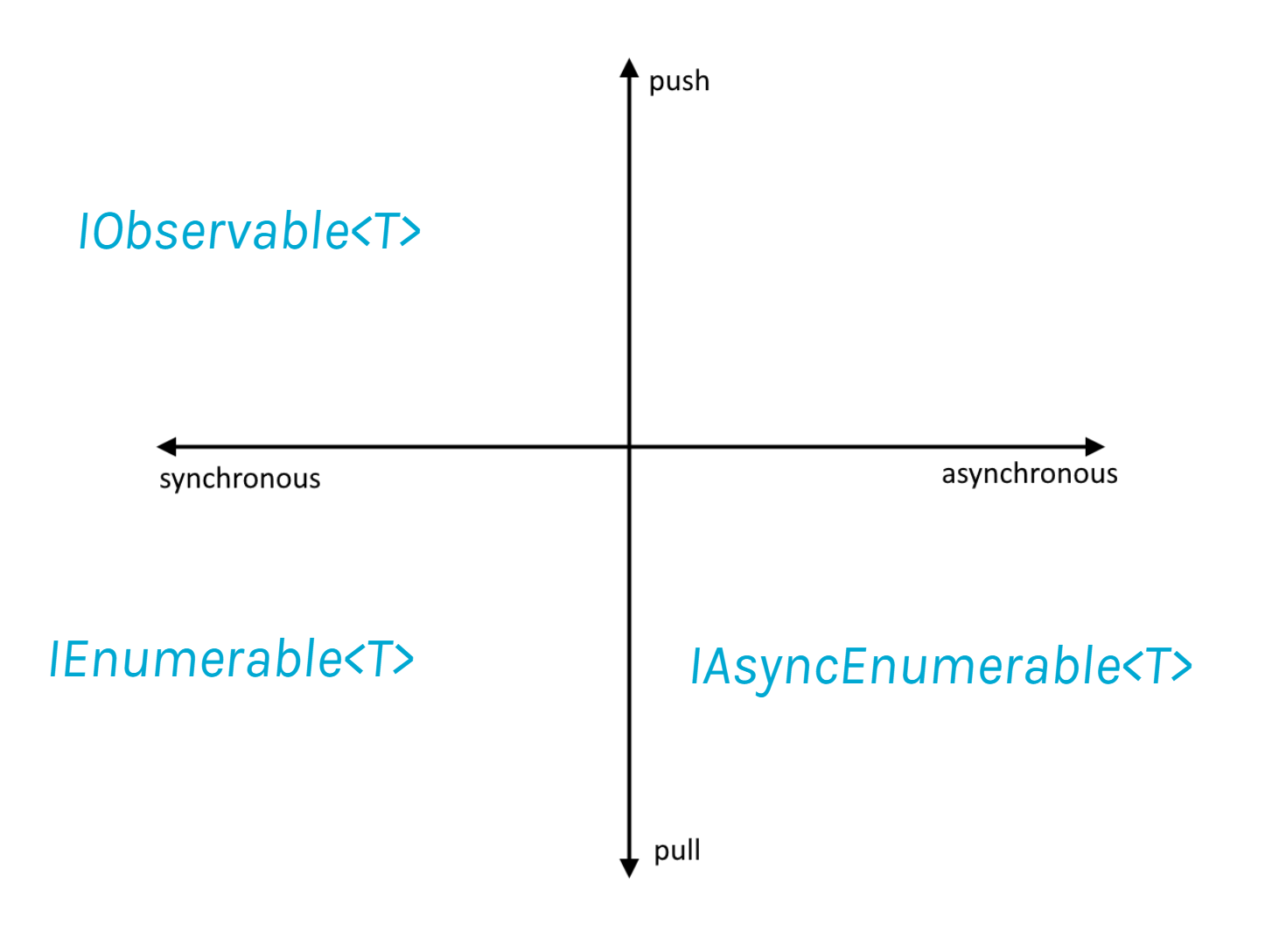 We can now see the relationship with IObservable<T> and IEnumerable<T>.

Being in this familiar family means that we don't have to learn new concepts to start consuming and composing operations over this type.

These extension methods are immediately understandable to us and are ubiquitous in C# already.

All of this would be pretty academic if we couldn't generate sequences to be consumed. Today there are a few options.

You can do this, and for performance critical code, this might be the most suitable approach.

It does require a fair bit of boilerplate code however, so here is a starting point:

2. Use the static helper methods in Ix.NET

I wanted to build something like this myself, and then I found this library, so I don't need to! Credit to Chen, this is a great library.

This library offers a very nice and simple way to express sequences. You build an async function that takes a IAsyncEnumberableSink<T> (defined by the library), and returns a Task. Now you can do your awaits, but when you want to yield an item to the sequence, you call sink.YieldAndWait(value) where sink is that parameter.

Today you cannot use the async keyword and iterator methods together, so having an async iterator method would require a new language feature. Well good news, it's in the works, take a sneak peak here.

Here is a snippet showing what it could look like.

We can produce sequences, but that won't be much use to us if we cannot consume them.

Just like the .ForEach(...) extension method on List<T>, we have .ForEachAsync(...) from Ix.Async, this lets us do work on each item, and gives us a Task to await to drive the whole chain of pull based work.

Unfortunately, dogmatism fails here, ForEachAsync is suffixed with Async because it returns a Task and operates asynchronously, however the delegate it takes is synchronous, this led me to build a method that can take an async delegate and name it ForEachAsyncButActuallyAsync. :facepalm:

Again, we have language support on the way. Here's what it would look like:

One of the problems that has meant that we've had to wait so long a first class IAsyncEnumberable<T> and language features is because there are many design decisions that need answering, for example;

Who is using it today?

There are a couple of large projects using this today:

Stay tuned, there is more to come on this topic.

I am a software engineer passionate about F#, C# and .NET. I love attending and helping run community tech events, and contributing to open source.

I am a software engineer passionate about F#, C# and .NET. I love attending and helping run community tech events, and contributing to open source.